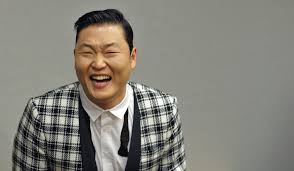 See that picture?  That’s PSY, the Gangnam Styleguy.  And in that photograph, he’s doing his signature “choreography” at a Los Angeles Dodgers baseball game.  See that older gentleman sitting near PSY?  That’s Tommy Lasorda. He’s old school baseball, a former player, coach, and your basic baseball legend.  Now take a close look at Tommy Lasorda’s face (which remained like that throughout PSY’s entire performance).
While I won’t be putting words in his mouth, I think Tommy’s expression says it all.  And I think that’s the expression that’s been on my face most of the week too.  I certainly looked like that when I caught Molly, the disaster dog, spraying that Kong doggie Cheez Whiz stuff directly into her mouth.  She stole the can, removed the lid, and figured out how to bite the stem so she was on the receiving end of much bacon cheddar goodness.  That’s what I get for putting her on a diet.  And I certainly looked incredulous as teenager after teenager arrived at my door yesterday with bags of clothing to donate.  I didn’t know that my daughter had decided to act upon her activist genes and spearhead a “Fitch the homeless” drive from our home.  (If you haven’t heard about “Fitch the homeless,” google it.  Talk about a potential disruption and brand disaster in the making!).  And just now, as I carefully (actually, reverently) opened the teeny tiny Blue Bunny chocolate covered chocolate ice cream in a wee chocolate cone and watched it leap bunny-like straight from the wrapper to the floor (yes, Molly ate it), I certainly had Lasorda face.We all have those days, weeks, months, minutes at home and at work (I’m smart enough to leave the work stuff under wraps!).  And when your work is basically dealing with that Allstate mayhem guy all day every day, you must have more than your fair share of “those days.” So, in the spirit of those top ten lists I talked about last week, here’s one we all can use: 15 Things You Should Give Up To Be Happy (you get five extras!).  It’s the best thing I’ve read recently (it would make my top 10 for sure) because no matter what personal or professional struggles you face, these 15 gems will help you get through them with intelligence, grace, and humor.