As the Houston area begins the slow process of recovery following the catastrophic damage caused by Hurricane Harvey, and the southeastern U.S. braces for Irma, here is a look at some of the most immediate effects of the storm and their repercussions for the region and beyond.

DRI President and CEO Chloe Demrovsky was interviewed by the Associated Press on how businesses recover in the wake of a Katrina or Harvey level event. She pointed out that companies whose workers can telecommute have a better chance of survival than a manufacturing company.

“For other types of businesses, it’s going to be a lot harder,” she said. “They have to ask, how long can we keep our doors shuttered?”

About 99% of companies in the Houston area are considered small businesses, according to U.S. government data. Together they make up a GDP of more than $315 billion for the region, and don’t have the resources of the far larger oil and medical industries. Many are hoping to rebuild, with disaster assistance from the U.S. Small Business administration. Flood insurance is less likely, as often small business owners go without it unless they are required to buy it.

Even those businesses that haven’t been physically damage need employees, and transportation is another massive part of Harvey’s damage. Flooding destroyed as many as a million cars in the Houston metro area – which is a car-dependent city where 94.4% of households have at least one car.

The total cost of the losses may be somewhere between $2.7 and $4.9 billion. While some automakers – including Ford and Volvo – are offering discounts on new cars to Harvey victims, 15% of Texas vehicle owners don’t have any kind of car insurance, meaning an estimate 100,000 may have to pay out of pocket for a replacement, when they’ve already lost their homes and belongings. 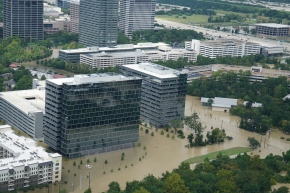 In fact, the huge amount of real estate development in Houston over the years may have worsened the storms damage, leaving fewer areas for floodwaters to recede to.

Harvey’s effects are expected to be felt far beyond the Houston area. The hurricane also swamped a third of the oil refining capacity of the U.S., and it may be weeks before refineries are able to return to full strength.

As a result, nearly four millions of barrels per day were offline, and without enough products to supply, the major pipeline from the Gulf coast to the east coast has been shut down. This could lead to a risk of shortages wherever the U.S. exports oil products. Global gas and diesel process have already jumped around the world.

While there doesn’t appear to have been serious damage to the refineries, returning to full strength will be a careful process, if flooding has caused more sustainable damage to pumps or cokers once they’re brought back online. During that time, as current stock dwindles, the risk of shortages will rise.